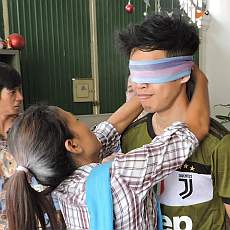 April13-15 is the official Khmer New Year but the deaf people will go to their home provinces then so there was a new year celebration today at the Deaf Development Programme office in Phnom Penh.  Click here to see the activities. 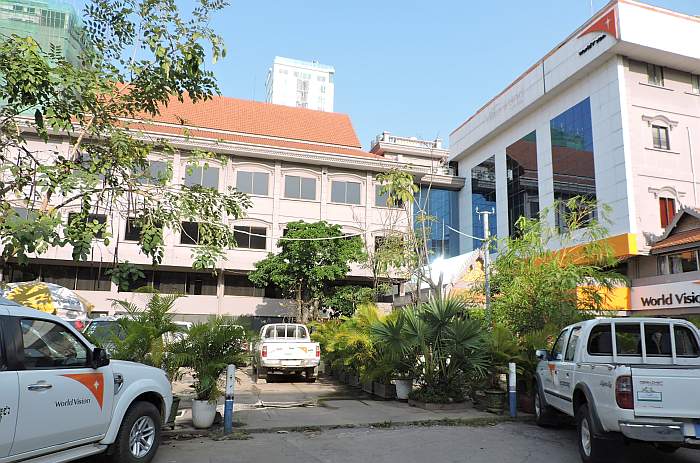 The English-speaking Catholic community was formed in the late 1980s when Fr. Tom Dunleavy was the first priest to return–at the request of the Vatican–to Cambodia after the Khmer Rouge era.  The community met in hotel rooms at first, then in a classroom, then a cultural center, and then moved to the auditorium of World Vision Cambodia pictured above.  The third-floor windows on the wing extending to the left are those of the auditorium which we use on Saturday evenings at 5:00 PM.  We have another liturgy on Sunday mornings at 10:00 AM at St. Joseph Church on the other side of town. 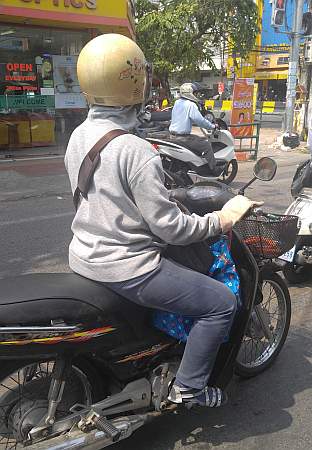 Yesterday it was 93ºF in Phnom Penh, I believe, and this young woman was waiting at the light beside me.  Notice the sweatshirt with the hood up under the helmet, the gloves, even socks with her sandals.  And all the other women are like her, all bundled up to avoid the sun and dark skin.

Cambodia is seeking $406 million to accomplish the demining projects it has planned through 2025.  The last mines were laid in the 1980s but we still average a casualty every five or six days from the estimated four to five million landmines thought to be still in the ground and from other ERW (Explosive Remnants of War) that is part of the landscape of much of the country.  Between 1992 and 2017, 1,000,000 anti-personnel mines were recovered along with 25,000 anti-tank mines, and more than 2,700,000 pieces of ERW.   There is still a lot of work to do.

The changing seasons have brought another fruit to the streets of Phnom Penh, but I haven’t a clue what it is.  It’s bright yellow like a lemon and about the same size but it’s more like a small apple.