At the end of the year, many organizations, government offices, and NGOs reported their activities for 2019. CMAC (the Cambodian Mine Action Centre) reported that they had cleared more than 36,000 mines and UXOs in the year just ended. (UXO=Unexploded Ordnance). The front-page article above explained that 67 square kilometers of land had been de-mined. It then restated the government’s commitment to completely clear the remaining mine-contaminated 2,100 sq km by 2025! Having cleared only 67 sq km in 2019 and 72 sq km in 2018, that seems like an impossible goal! (As a footnote to this situation, remember that these mines were put down 35-45 years ago! Mines are insidious and rightfully banned by most of the world. The US is one of the few nations that has refused to sign on to the ban-landmine treaty.)

There was an article in the international press today about US governments taking measures to prevent farmland in the United States from being owned and controlled by foreign governments and entities. The US is probably taking those steps because of China’s aggressive policy of buying not just the crops from other countries but their natural resources and the land itself.

Cambodia is experience a devastating invasion by China and Chinese nationals. Every day there are articles in the papers about land values increasing beyond the reach of locals; neighborhoods and whole towns being changed by the influx of Chinese business people and tourists; the rates of crime going up because of Chinese gangs and criminal activities; etc.

This is all backed up by personal stories of the people we encounter in our mission work, people who have been negatively affected and displaced by the Chinese.

This is a view from the hilltop where the Catholic church center is located in Sihanoukville. In previous years this view was of trees. Now they are gone. Basically all of the buildings visible here have sprung up since our retreat a year ago.

In going to Sihanoukville for the priests retreat, the Chinese presence and influence was most obvious: • On the bus ride to Sihanoukville, the passengers across the aisle were speaking Mandarin. • We have too many priests for the rooms at the church center so in previous years the overflow stayed at the Salesian Priests training hotel twenty minutes away. Because of the increased traffic and congestion from construction, it now takes an hour to get to that site so our priests stayed in hotels–new and probably Chinese-owned–near the center. • The Salesians had a restaurant and gelato shop in central Sihanoukville. This year the rent was raised from $400 a month to almost $4,000 as the Chinese buy up everything in sight. The Salesians closed their shops where they had trained local youth. • The local people have been moved far outside the city, away from their jobs, as the Chinese buy up apartments and neighborhoods and raise the rents. • During the retreat I went to buy a Coke at a shop near the church. The shop is new and no one in the shop spoke English or Khmer, only Mandarin Chinese. • A local English newspaper is now producing a Chinese-language insert. • Construction is occurring everywhere and causing shortages of water and electricity. • The construction doesn’t benefit the locals. The construction companies are Chinese and they bring in their own workers. All the salaries, etc., go back to China. And the list goes on and on.

China now owns Cambodia and the government doesn’t complain because China gives them $600,000,000 a year no strings attached. (You can guess which pockets that goes into.) In return Cambodia supports China in international disputes, such as concerning the islands in the South China Sea.

For the past week Cambodia has been experiencing major power cuts, more than the usual shortages. Actually the past four or five years in Phnom Penh have been relatively good after the Cambodian government erected power transmission lines and started buying electricity from Vietnam. It was good enough that at DDP we got rid of our generator because we weren’t using it any more.

The governments in the other countries know how to plan and implement. They see people moving to the cities. They see cities growing higher and higher with skyscrapers demanding more electricity. They see the lifestyle increasing, especially the demand for air conditioning. And they plan for it.

The government of Cambodia is incompetent in many ways and this is an obvious example. The prime minister loves to let everyone know that he is the longest serving leader in Southeast Asia, more than three decades. These electricity problems arose since he took power. Guess who should take responsibility for the sad situation we find ourselves in now?

Jim Wallis of Sojourners is a prophet for our time. Here he speaks to the midterm elections: 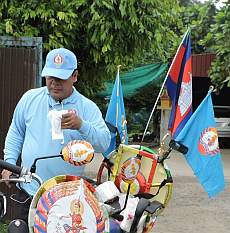 We just finished the second weekend of the campaigning period leading up to the general elections next Sunday.  A lot of the activity at the start of this final week was centered on stages set up around the city.  Click here to see some of the venues along the riverfront.

Jim Wallis is one of the strongest, clearest, and most authentic Christian voices speaking out now about the travesty that is the current president and his Republican administration. Wallis is the director and main voice of the Sojourners movement that is now promoting a Reclaiming Jesus campaign to counter the abuse of Christianity by Trump administration officials.

Here is a quote about Trump’s Helsinki lies and the walk-back lies put forward by him and Sarah Huckabee Sanders:

Cambodia will hold national elections on July 29th for the prime minister.  The elections are basically a farce since the ruling party had the opposition party ruled illegal.  There is a two-week campaigning period before the elections and that started last Saturday when there was great chaos throughout the city as the ruling party and eleven minor parties took to the streets with great fanfare and noise. 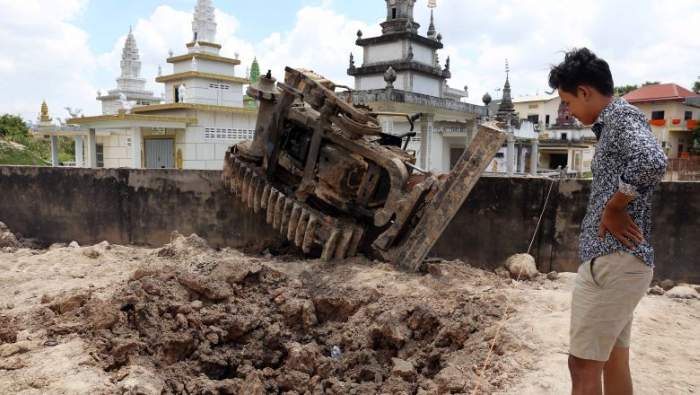 Today the Phnom Penh Post published this photograph and a short article about a bulldozer which was destroyed by an anti-tank mine in Phnom Penh on the weekend.  It turned out the mine was in a truckload of dirt hauled from one of the provinces to be used in a construction project near this Buddhist wat.  The driver was thrown over the wall and suffered serious injuries but survived.

The last mines were put down forty years ago but they’re still killing and maiming.  We average a casualty every four or five days–after four decades. 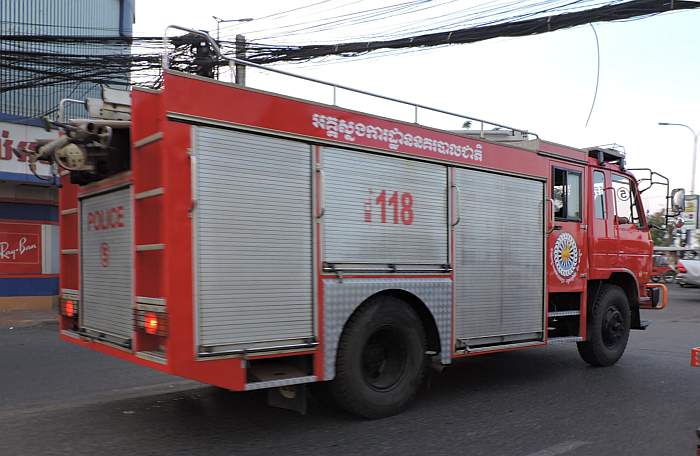 In my eighteen years here in Cambodia, I have never seen a fire truck fighting a fire.  In fact, I have only seen a fire truck on the street four or five times.  I read in the paper that they occasionally do go to fires but usually part of the story is that they don’t actually do anything until the firefighters  are paid on the spot.

Today I heard fire truck sirens four times and actually saw this one!  All this activity probably means the government is getting ready to use the fire trucks against demonstrators.  National elections are coming up in July and the trucks are probably part of the intimidation of free speech in the run up to the voting.