In many cities around the world, major streets and boulevards have been given the names of famous people who lived one or two hundred years ago–or even longer.  Many times the person for whom the street is named has long since been forgotten. 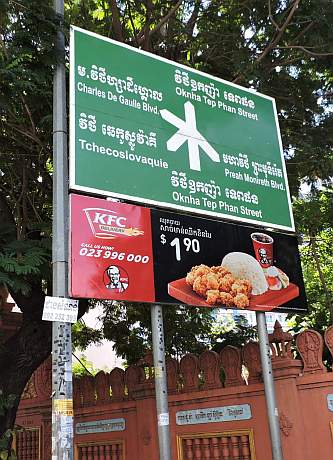 The pattern is different in Phnom Penh where the Khmer Rouge tried to establish their own Year Zero in the 1970s.  Here is a contemporary street sign that reflects more modern history:

Tchecoslovaquie is the French form of Czechoslovakia, one of the Eastern bloc countries that supported Cambodia when the West would not.

Oknha is the title given to a person who donates a lot of money to the ruling party and so is honored with a street named for himself.

Monireth is the name of the queen mother and recognizes the royal family.

And then there’s Colonel Sanders!