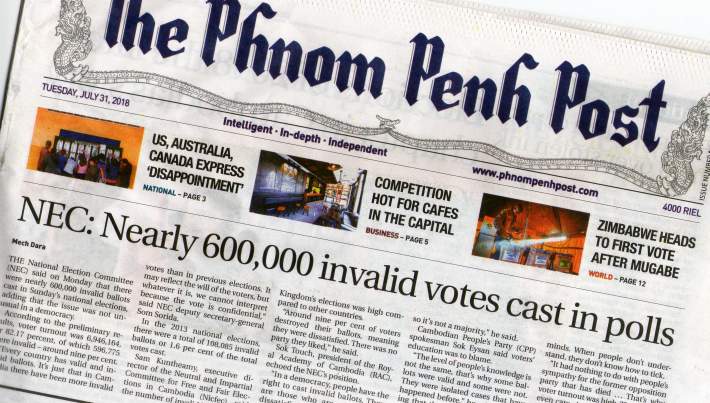 There was no way the ruling party–the CPP, the Cambodian People’s Party–was going to lose the election last Sunday.  The CPP-controlled legislature and courts had the main opposition party declared illegal and forced into exile or imprisoned the opposition leaders.

One of the opposition leaders in exile in France called for a boycott of the election but that was a dismal failure because the CPP made a big issue of the “clean finger” campaign (the index finger is dipped in ink when a person votes) and basically threatened to prosecute anyone who didn’t vote, and they know the person didn’t vote if there’s no ink on his or her finger.  (There’s no law that says a person must vote but that’s irrelevant to the CPP.)  Also the CPP can see which villages or other area had a low voter turnout and then that area could say goodbye to any hope of a new school or road or other service.

The only alternative left for those who wanted to protest was to go to vote but then invalidate the ballot by marking no candidate or several candidates.  The headline above shows that is what nearly 9% of the country did.  Approximately 600,000 ballots were declared invalid.  In the last election in 2013, only 1.6% of the ballots were invalid.  Everyone knows what the huge jump in invalid ballots means but the government can claim that they had a large turnout that makes the one-party election “legitimate.”