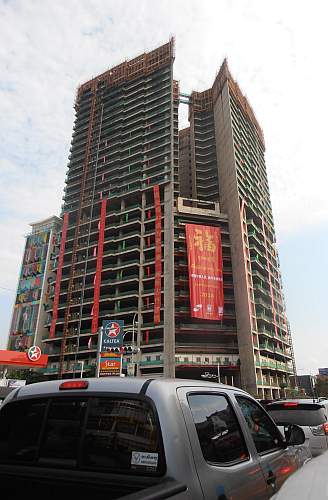 Back in 2008, a building named Gold Tower 42 was begun at a prime major intersection in Phnom Penh.  Unfortunately the global economic crisis followed immediately and construction stopped in 2009.   Building began again  but stopped again in 2012.  Then construction resumed in 2013 only to grind to a halt in March, 2017.  Covered with green construction safety netting, a more appropriate name at this point is Green Stub 31, the number of floors that have been completed.  Now the papers report that a company from Shenzhen, China has been hired to finish the building and the Chinese promise that will happen in 2019.  We’ll have to see if the building actually reaches 42 floors and if that actually happens in 2019.  The new company has just hung large red signs and banners on the empty shell so maybe there’s hope.