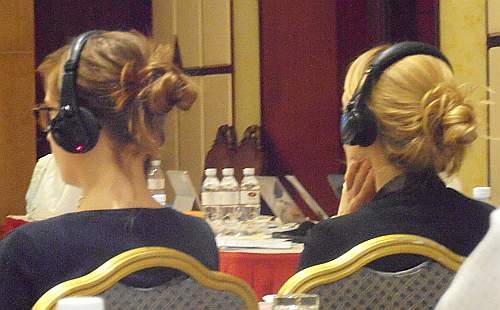 I just sat through a two-day review of the National Disability Strategic Plan organized by the United Nations Development Program.  I’m not sure how much good such large scale (200+ people) reviews accomplish but at least a few good ideas were aired.

Such meetings are conducted in Khmer with simultaneous translation for all the United Nations people, foreign consultants, and others who wouldn’t understand Khmer.  That’s standard procedure.  The difficulty is that it is part of Khmer culture to always use a microphone, even for a small group (ours was large) and to turn it up almost as loud as it goes.  A typical large meeting in Cambodia had a noise level that would literally be illegal in the United States unless people were wearing ear protection.  What makes it especially difficult is that we foreigners have to listen to the English translation through the headphones but the ambient noise is so loud from the PA system that it is sometimes almost impossible to understand the interpreter even when we are wearing the headphones right over our ears!  Two days of that is really frustrating.