Today started off with a tour of the Vatican Museum and in the afternoon we had a liturgy together in St. Peter’s Basilica. 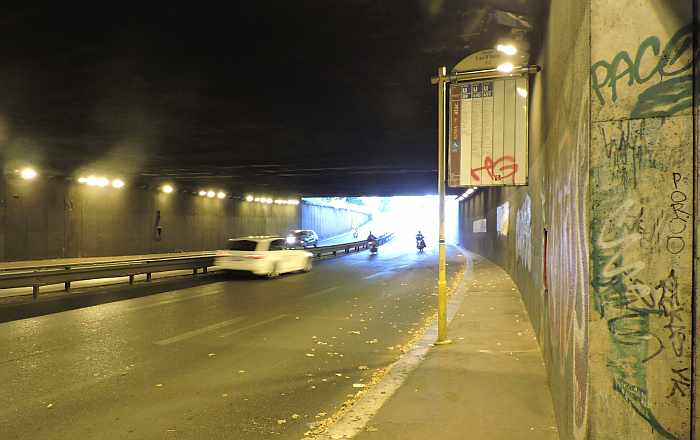 I found an app for my phone that showed me bus routes and how to get from place to place and it really made this trip much more enjoyable.  Buses go everywhere but knowing where and when has always been a problem when I was here before.  One problem this time was finding this bus stop.  I was going to the Vatican and could see the stop indicated on the Corso D’Italia but I couldn’t find it, even when I asked some locals.  Then one man noticed a sign pointing downward and I found the stop in the underpass below the street! 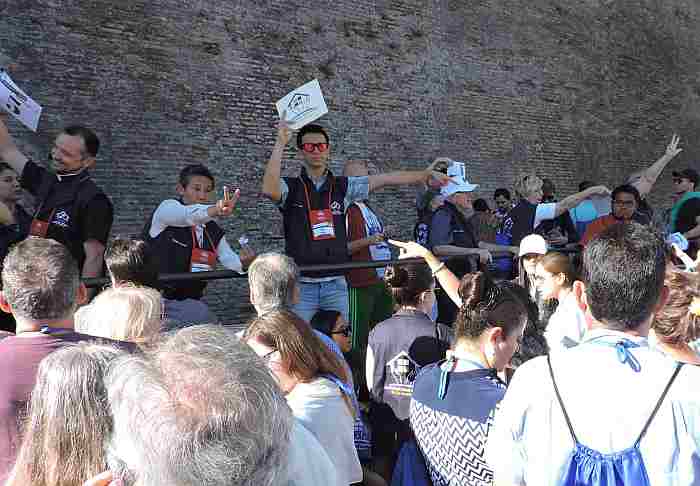 Our group had prearranged tickets for the Vatican Museum which was great because the line was a half-mile long!  There are so many people in Rome during the summer!  Here our organizers are trying to get all of us separated into our groups because we were too many to go through the museum with just one group. 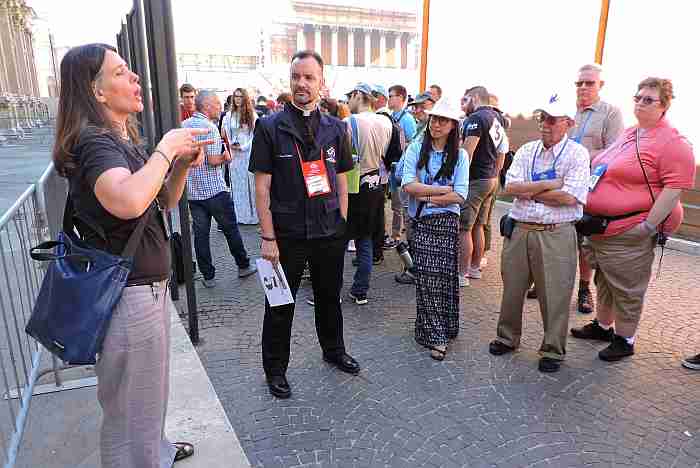 This woman is deaf herself and was our tour guide.  Here she is explaining what we will see when we get into the Sistine Chapel. 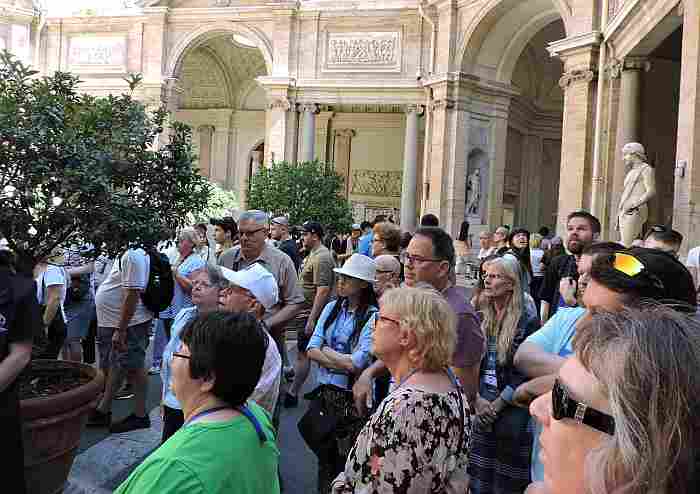 I was really glad I had been to the museum before when there were only a few people because this time there was no time to stop and look around and a large part of our time inside was spent literally shuffling along the floor because of the dense crowds.

One of the passageways between the different buildings. 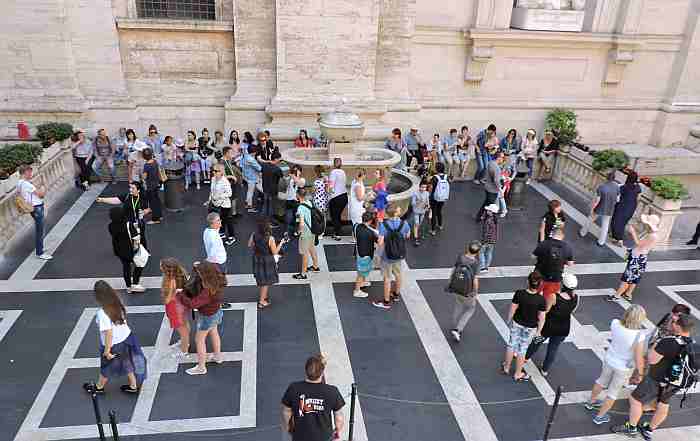 There are very few places for people to sit so it was a relief for some to find this ledge where they could sit and rest. 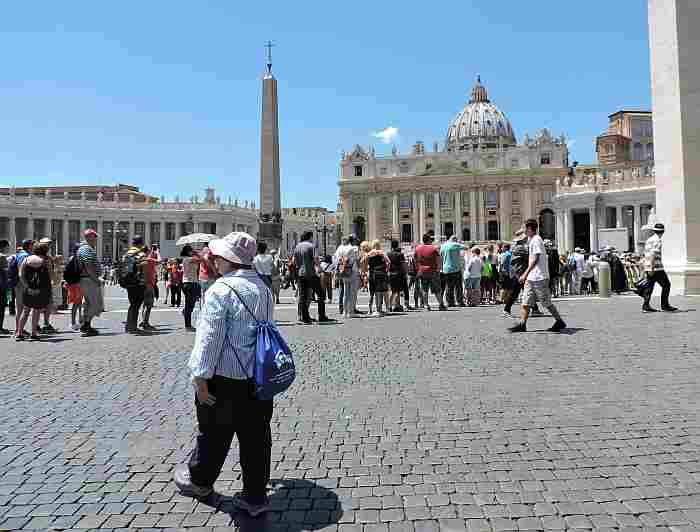 After lunch we were to go to St. Peter’s Basilica for a mass with our group but that required going through the security checks which are ever-present in Rome.  This is the line leading up to security where bags are x-rayed before people can enter the basilica.  It took us 55 minutes to get up to the front doors. 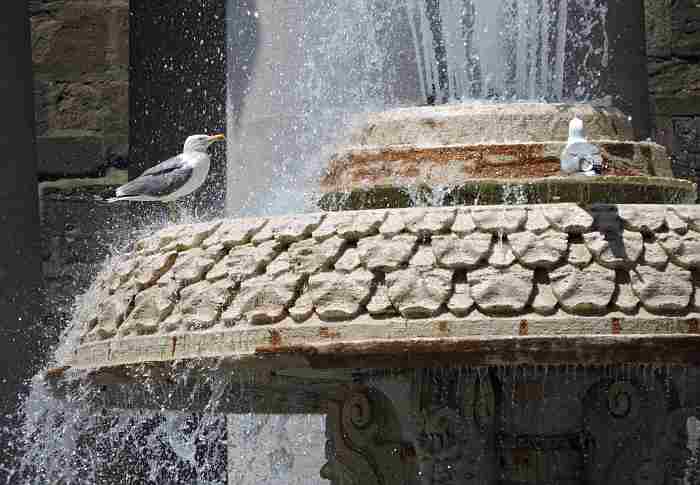 While we stood in line, these gulls enjoyed one of the fountains in St. Peter’s Square. 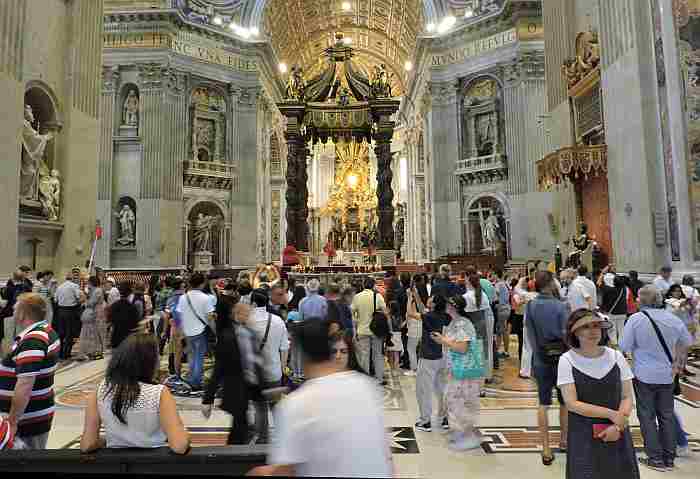 This was the crowd that awaited us once we got through the basilica doors.  Our liturgy was at an altar behind the main altar, an area blocked off to the tourists. 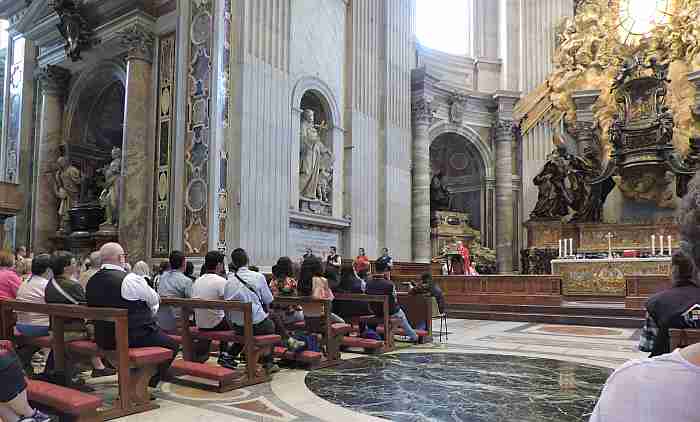 One of the difficulties with liturgies in St. Peter’s is the scale of things.  Here the people are separated so far from the altar and the presider.  That is a line of four sign language interpreters standing in front of the archbishop as he preaches.