THE big holiday festival in Cambodia in the Khmer New Year, normally April 14-16, give or take a day.  The three-day holiday means most of the urban people leave the urban areas and head off to their home provinces.  Remember that the Khmer Rouge emptied the cities, and the city dwellers, the “new people” in the return to an agricultural utopia, were especially targeted by the Khmer Rouge.  Many, many of them were not alive at the end of the Pol Pot era and slowly rural people took their places in the cities.  Now, less than a generation later, those new urbanites, following the old traditions, must return to their ancestral homes in the provinces for the new year.

But there is still a lot that happens in Phnom Penh for the new year.

1.  Students at the Deaf Development Programme 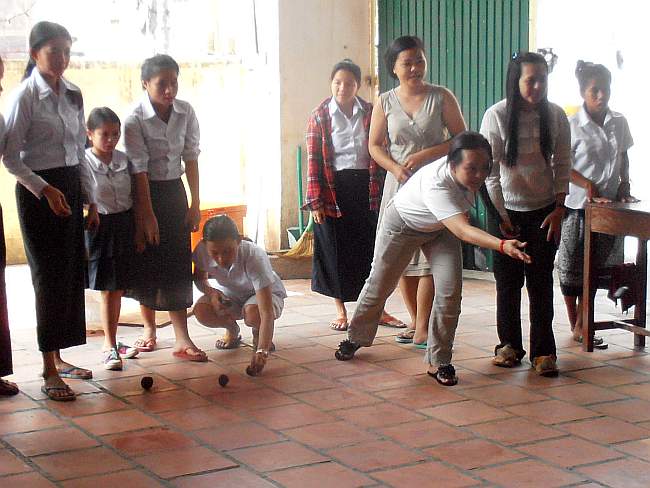 Here DDP students and staff play a traditional new year game, pitching large seeds to dislodge seeds set up at the other end by the opposing team.  It’s girls against boys. 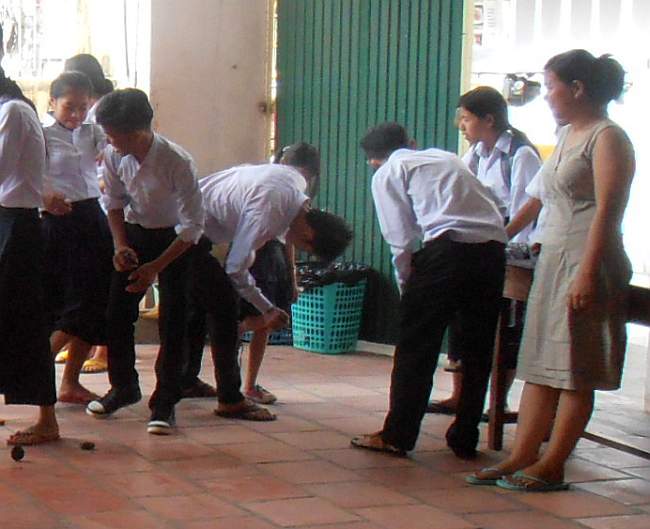 The boys won and so they rap the girls on the knee with the big seeds.  In an older more strict, more traditional milieu this was the only time girls and boys could be so close and actually touch each other.  There was no dating and so the new year was the opportunity for the young men and women to be together in an acceptable way, to meet, talk, and check each other out. 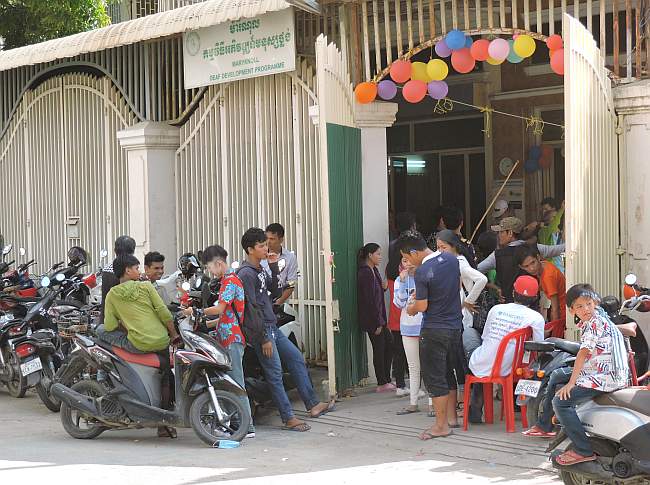 The first day of the new year was on Friday but because so many of the deaf people had to return with their families to their original villages in the provinces, the Deaf Community Center had a New Year celebration the previous Sunday.  Close to 200 young deaf men and women came together for the event. 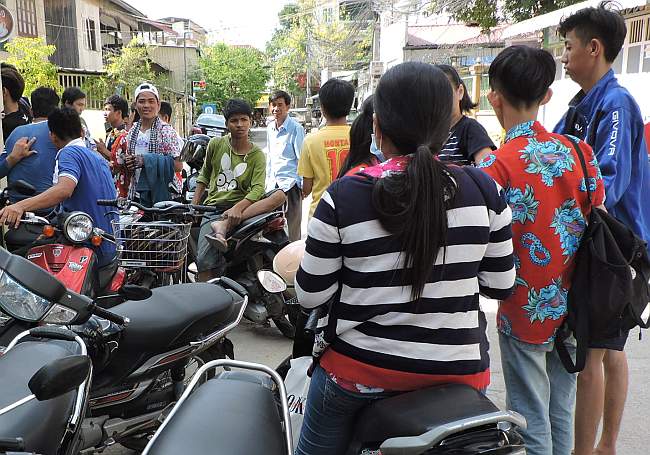 Because isolation is such a large and significant part of a deaf person’s life, these young people don’t even have to get inside to start enjoying themselves.  They can arrive, get off their motorcycles, and the party starts as they get together with their friends. 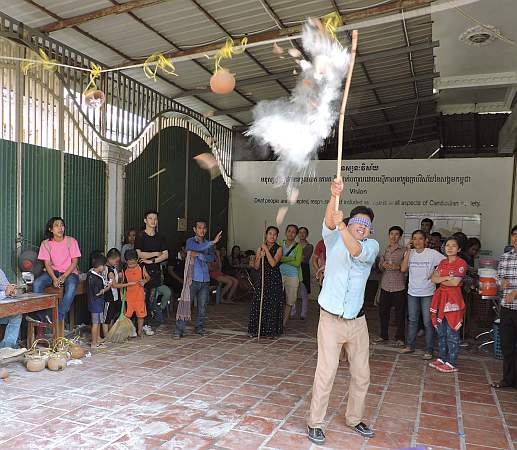 Inside were all sorts of fruit drinks and tea and coffee, and the DCC staff had arranged some games.  Almost everyone present tried his or her hand at smashing these pinata pots hung up in the area in the front of the office.  Here one of the DDP deaf staff makes contact and smashes the pot releasing a shower of candy pieces and a cloud of powder. 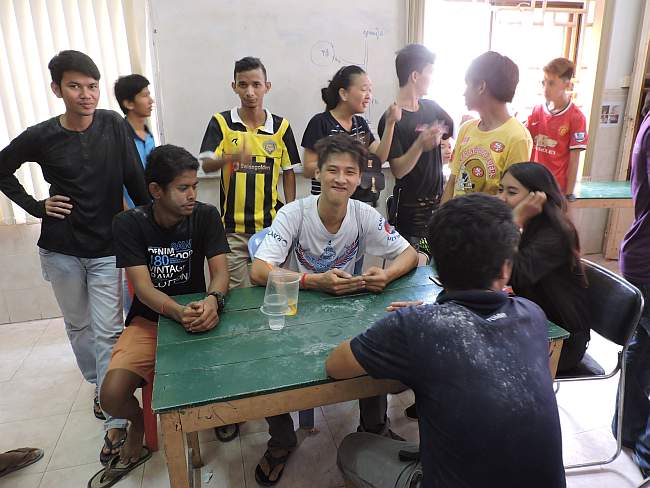 Most important, though, was just the chance to be with their friends and to talk using their own Cambodian Sign Language without having to worry about understanding or being understood by  hearing people. 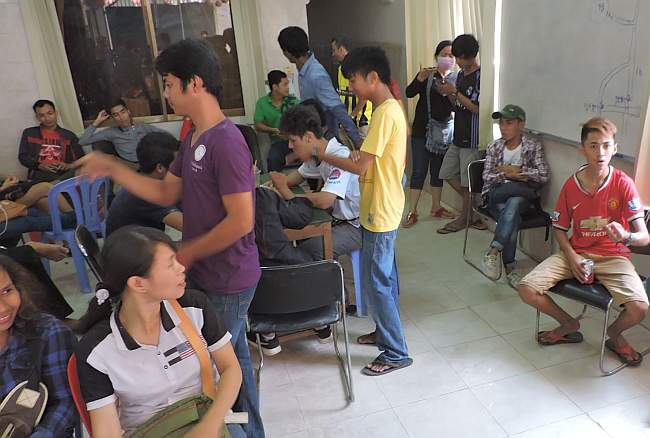 Talk, talk, talk was the first order of the day!

3. The Celebration in the City 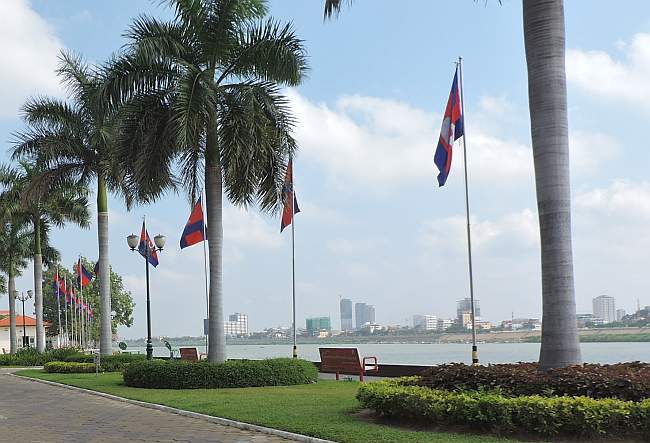 Normally along the waterfront the flagpoles display the flags of many different nations.  Today, though, for the New Year, each pole has the Cambodian flag only. 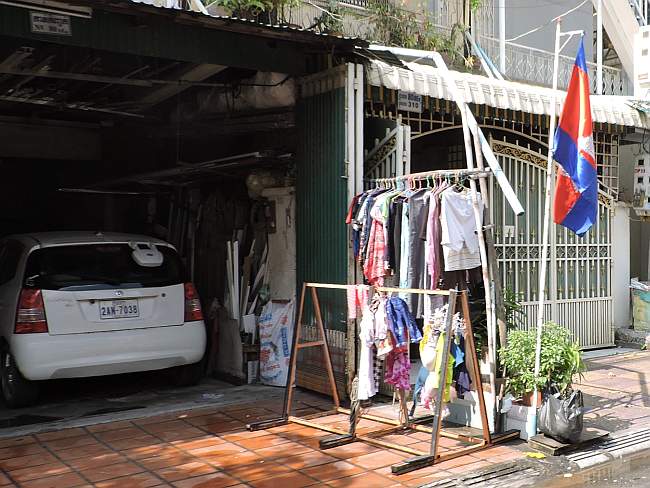 On the residential streets, many house are shuttered because the families are in the provinces but the families who stayed…did their wash and displayed their own family flag.

Articles in the newspaper decried the change in customs and how the traditions are being lost.  In days gone by, everyone would go to the wat and play the new year games.  Today people go less to the wat and instead frequent the community festival sites which have live music, dancing, food, and other attractions.  This was a major festival site in Phnom Penh, at Wat Phnom. 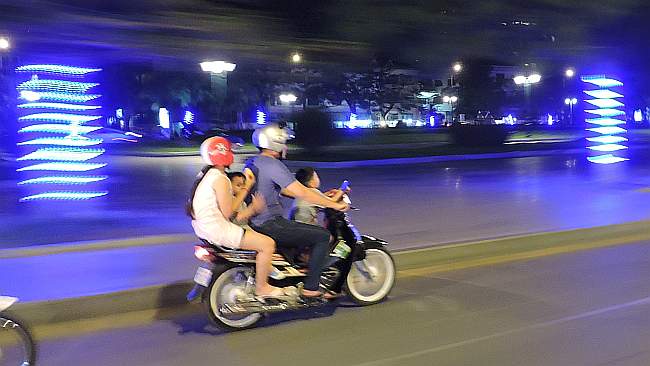 This family was probably at the riverfront all afternoon and now that night has fallen they are heading home along a boulevard decorated with special blue lights put up for the festival. 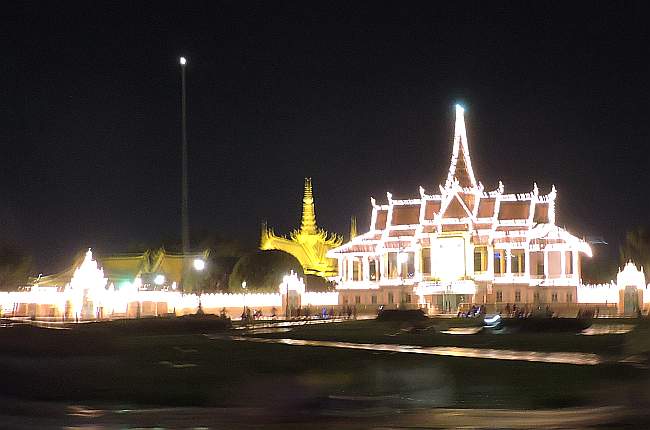 Parts of the royal palace are lighted in a grand style for the New Year celebration, welcoming the Year of the Rooster. 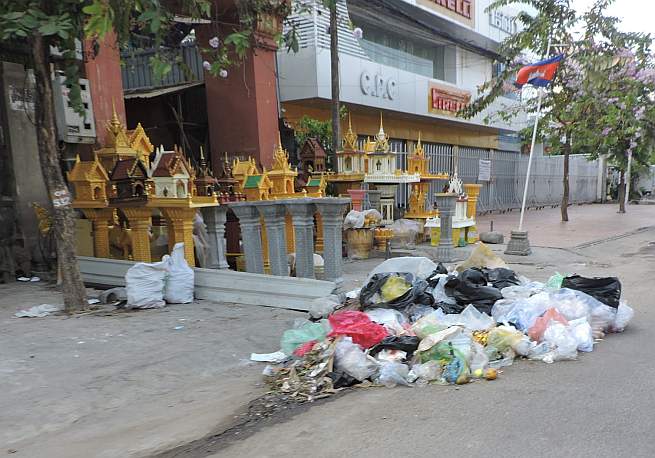 Because the rubbish collection company also has a holiday, large piles of trash dominated some streets. 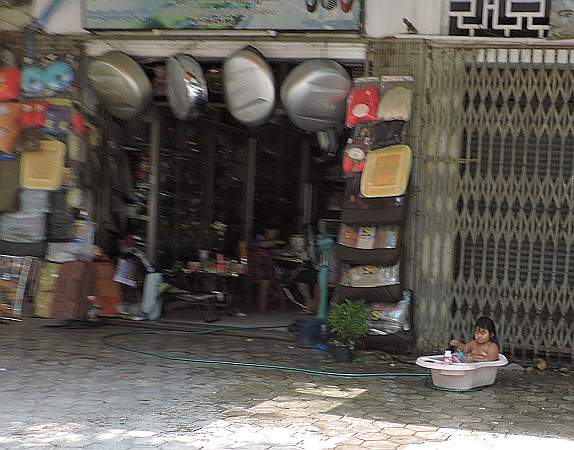 Her family didn’t go anywhere, she didn’t visit her cousins in the province, but this little girl had a good new year day, thank you. 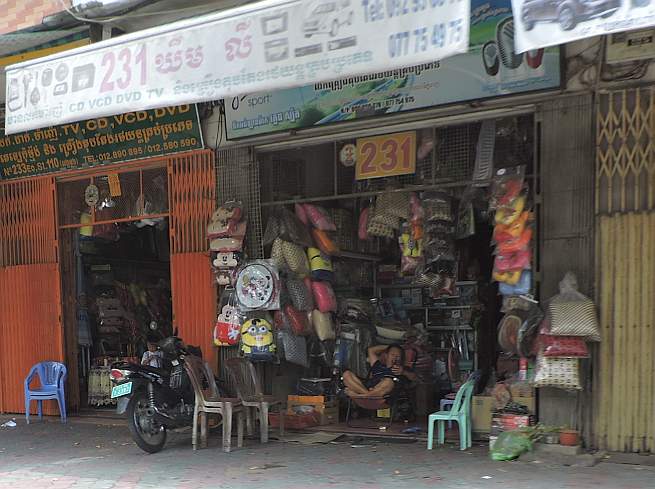 This man didn’t go to the province either but just stayed at home–and basically did what he does every day as he “minds the shop.” 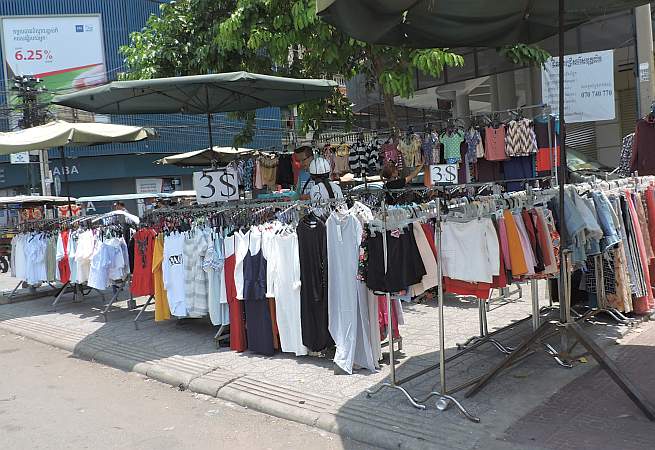 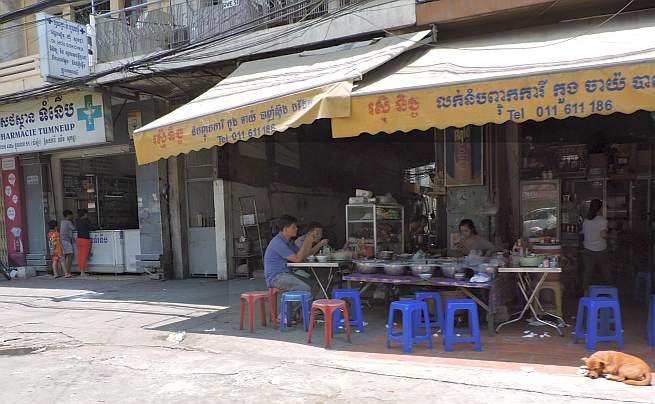 People need to eat and there’s always someone wanting something from the pharmacy so these two shops were open for business. 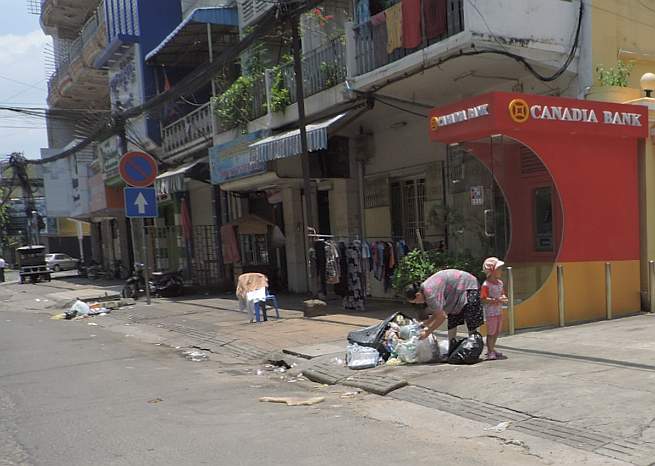 This mother and daughter spent the day like they do on most other days–sorting through other people’s trash for something to recycle.

Most people LEAVE Phnom Penh for the Khmer New Year holiday to return to their home province but apparently a lot of people also COME to Phnom Penh.  On Tuesday morning, the day after the holiday period, I ran into quite a few vanloads of mostly young people heading back to the hinterlands.  They looked happy so I guess they had enjoyed their stay in the big city. 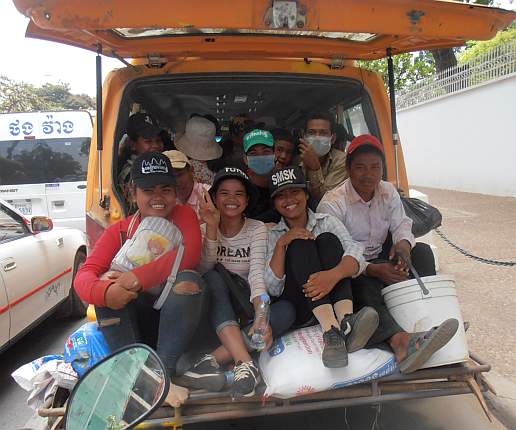 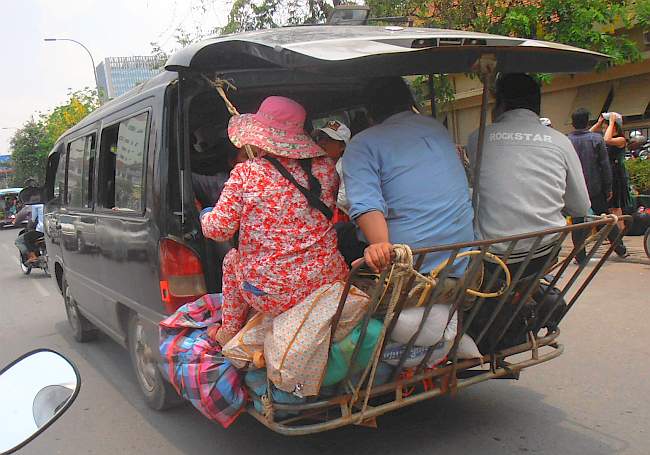 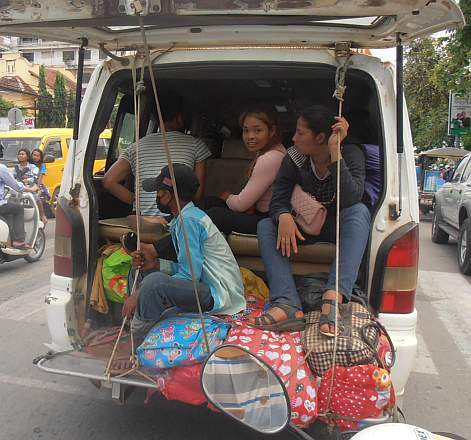 The end of the Khmer New Year series.