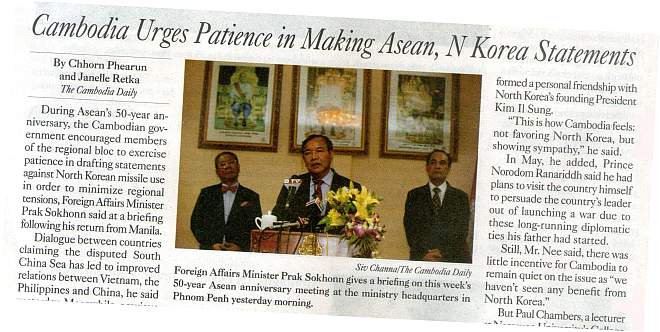 China annually gives hundreds of millions of dollars to Cambodia, basically with no strings attached, which means it can easily find its way into the pockets of officials.  There is little transparency or accountability.  When you have a good friend like China, you don’t want to offend her, so Cambodia has made sure that in the last several ASEAN meetings there has been no final meeting statement criticizing China as some ASEAN members want to do because of China’s claiming most of the South China Sea which other ASEAN members also claim.

At the 50th anniversary of ASEAN, Cambodia again played friend to China.  A Thai academic “said this was another show of loyalty to China.  ‘Cambodia is urging all sides to be patient and de-escalate precisely because the Hun Sen government is playing the role of a country which appears most neutral in this affair but which is also trying to show China that it is Beijing’s most loyal ally among ASEAN states.'”