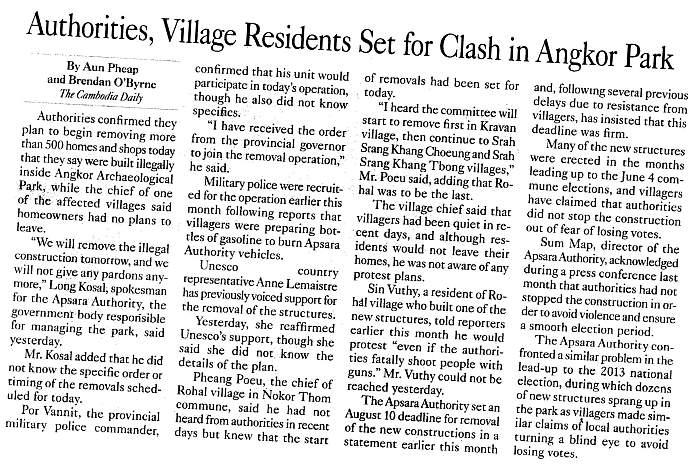 This is such a typical scenario in Cambodia where poor villagers are taken advantage of by venal, unscrupulous officials.  Here’s how it worked:

The authorities admit that they didn’t tell the villagers not to build because they didn’t want to lose their votes for the ruling party in the commune elections.  Note these paragraphs from the clipping above:

“…villagers have claimed that authorities did not stop the construction out of fear of losing votes.

“[The] director of the Apsara Authority acknowledged during a press conference…that authorities had not stopped the construction in order to avoid violence and ensure a smooth election.

“The Apsara Authority confronted a similar problem in the lead-up to the 2013 national election, during which dozens of new structures sprang up in the park as villagers made similar claims of local authorities turning a blind eye to avoid losing votes.”

Almost no piece of paper is issued in Cambodia without someone being paid.  And it probably wasn’t the government collecting money for the worthless papers.  Why doesn’t the government prosecute the local officials for fraud and malfeasance?  Ah, business as usual.