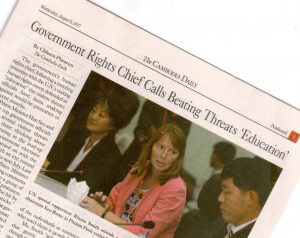 Sometimes the issues center not around corruption but just plain ignorance and incompetence. Following up on the first of these posts, about the prime minister’s threats of violence, here is one of his officials—the chair of the Cambodian Human Rights Committee!— saying the explicit threats of violence are “education.”

“The government’s human rights chief, following a meeting yesterday with the U.N.’s visiting human rights envoy, defended as “education” the violent threats officials have been making against would-be protesters in recent months.  Prime Minister Hun Sen and other top government officials made several violent threats against those thinking about demonstrating in the lead-up to June’s commune elections and have carried on with the tough talk with an eye toward the national vote next July.”

It gives you a very clear idea of how human and civil rights are understood and respected (not) in Cambodia. The woman in the picture is the UN’s human rights envoy who looks like she can’t believe what she is hearing. The Kingdom of Wonder….