Today started off with a colonoscopy.  I get one every three years, and this was the year.  I showed up at BNH Hospital at 0710 and they got me ready.  The procedure was supposed to start at 8:00 AM but the doctor wasn’t on time and the nurse got into a really interesting conversation with her questions about the difference between Protestants and Catholics.  And somehow she knew I was a priest and wanted to know more about that: “It’s like being a Buddhist monk, right?”

I woke up an hour later and everything was finished.  The nurse took me to the surgeon who explained what he found (not much) and what I should do (wait for the biopsy results).  One of the effects of the anesthetic they use is temporary amnesia.  Having been forewarned, I turned on my phone voice recorder while the doctor was talking to me.  (At least I remembered I was supposed to have amnesia!)  That was helpful when I played it back later. 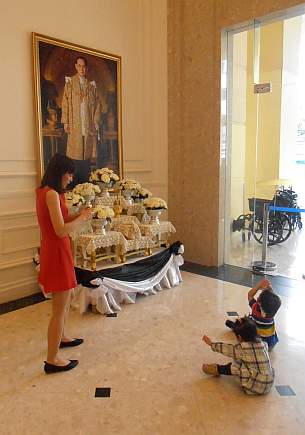 In the lobby of the hospital, as I was leaving, I ran across a mother teaching her children to wai the deceased king (to hold their hands together in gesture of reverence). 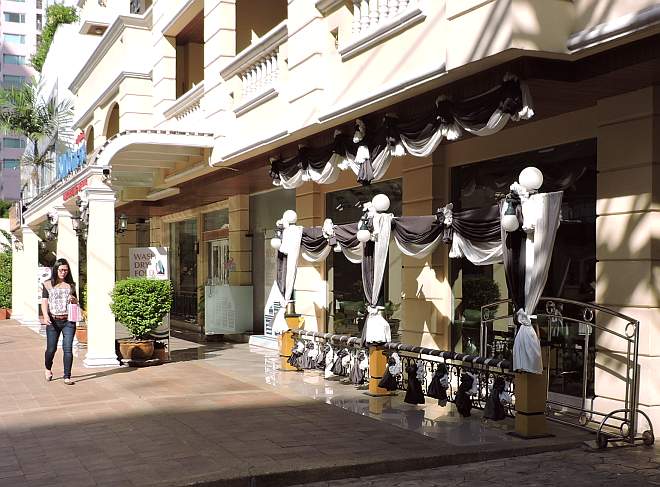 This building near the hospital has an outdoor display of reverence for the king.  There has been a year of mourning planned and almost every company, every store still has a shrine in the kings’ honor.  I saw in the newspaper that now the king’s cremation is planned for the end of October.

I went back to Mirth Sathorn Hotel and checked out and then went to meet a refugee we have worked with in Cambodia.  Somehow he got to Bangkok (he has no identity papers or passport) and I wanted to check on him.

We ate lunch and then I took the SkyTrain and the Airport Train back to the airport and was on my way on a 5:30 PM flight.