Today was one of those long strange days that result from traveling east across the International Date Line.  I arrived in Shanghai from Bangkok at 7:30 AM Monday morning and had eight hours before my flight from Shanghai to Newark, New Jersey.  At 3:45 PM I left Shanghai and it was a 14-hour flight to Newark where we arrived at 6:15 PM.  But it was still Monday, almost 23 hours after I arrived in Shanghai on Monday morning! 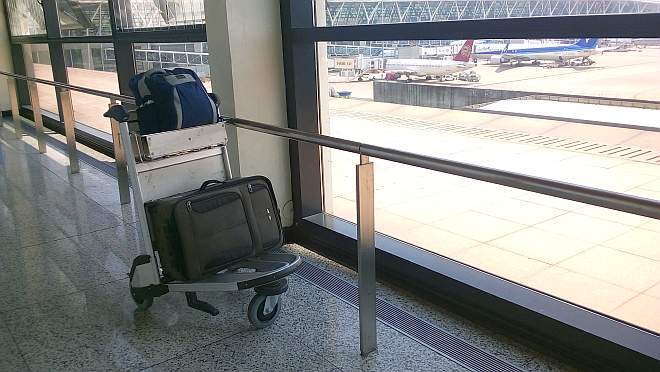 When I arrived in Shanghai at 7:30 AM, it was night time in New York.  To lessen jetlag I try to operate on the destination time so I wanted to sleep during the eight-hour layover in Shanghai.  That Pudong Airport doesn’t have any good places to sleep so I used the luggage cart to block traffic and just lay down on the floor between the cart and the window to get as much sleep as I could.

While I was walking around the airport before I tried sleeping, and then again when I finished sleeping and walked around some more, someone would approach me about every ten minutes wanting to sell me an iPhone.  That happened the last time I came through Shanghai also.  This trip I was approached eight times before I got on the plane out of Shanghai.

Once I got to Newark Airport on Monday evening, I took the airport bus into Manhattan (about 50 minutes) and got off at Grand Central Terminal.  There I caught the MetroNorth train to Ossining, and there I got a taxi for the fifteen-minute ride to Maryknoll where I arrived about 10:00 PM Monday night.